The Importance of Skin on Apples 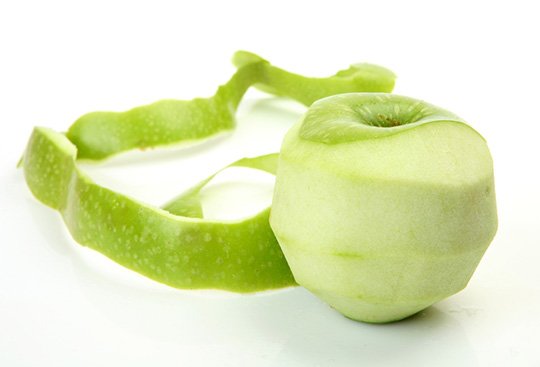 When you peel an apple, you effectively waste many nutrients. The nutrient loss is severe and needs to be avoided in order to preserve the fruit’s natural benefits. A peeled apple loses a lot of vitamins and its fiber content drops to almost half of the original amount. While even a peeled apple is not without its benefits, it is strongly recommended that you only peel an apple when you need to focus on the appearance and presentation of a dish.

Dietary fiber is a type of carbohydrate which our body needs for regular bowel movement. Roughage plays a key role in keeping glucose and cholesterol levels normal. An apple with its skin intact contains about 4.08 grams of fiber, and 16 percent of the recommended daily intake (RDI). The same apple without the skin would provide only 2.21 g of fiber, and 9 percent of the RDI.

If you are looking to increase your natural vitamin intake, then an apple is just what you should be looking for. An apple provides nearly two percent of the RDI for vitamin E while one percent folate is also provided. Vitamin E is extremely important for our body as it shields the cells from free radicals. Meanwhile, folate is a vitamin B-complex needed for the formation of new cells. Anemia is one condition which is a result of lack of folate. On the other hand, a peeled apple has a very low level of vitamin E and lacks folate. Similarly, vitamin A is another antioxidant which suffers a decline from two percent to one percent of the RDI after the apple is peeled. In the same way, Vitamin K, which helps your blood to coagulate, suffers a decline from five percent to one percent of the RDI.

When it comes to peeled apples, the minerals are the least to suffer. It has been learned that an apple’s potassium content suffers a drop from four percent to three percent of its RDI after getting peeled. However, copper faces an increase from two to three percent. Copper works with iron in order to form new blood cells.

When the skin of an apple is removed, the fruit loses sucrose by two grams and glucose drops by 1 gram.

By now you should know why it is important to retain the skin of an apple in order to get the most nutrients from it. A peeled apple might be more appealing, but is less nutritious.