Is Barefoot Running Better For You? 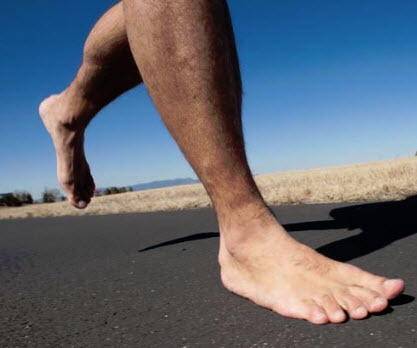 Studies have shown that when running barefooted, runners tend to land their step on the ball of their foot, whereas shod runners mostly land on their heel, probably due to increased amount of comfort and support provided by running shoes. If you are a regular runner then over a period of time this pressure on the heel may lead to various problems such as shin splints, Achilles tendinitis, ankle sprains. In the worst case scenario, you may also suffer from back problems due to the extra pressure on your heel. A scientific study has reported that about 30 percent of running enthusiasts suffer from foot and back injuries due to their running technique.

Madhusudhan Venkadesan, a postdoctoral researcher in human evolutionary biology at Harvard, has carried out a number of detailed studies into the effects of barefoot running, concluding that unshod runners are less prone to foot and back injuries as compared to shod runners.

“Heel-striking is painful when barefoot or in minimal shoes because it causes a large collisional force each time a foot lands on the ground,” observed Venkadesan. “Barefoot runners point their toes more at landing, avoiding this collision by decreasing the effective mass of the foot that comes to a sudden stop when you land, and by having a more compliant, or springy, leg”, he concluded.

A research has revealed that when wearing modern running shoes, you use only two of the 20 total muscles in your foot and 12 in your leg. As a result of the support provided by the running shoes, these unused muscles become inert. Barefoot running helps build up your foot muscles that have gone to waste with time.

People usually argue that when they have always worn cushioned shoes without picking up any injuries, why should they consider running barefoot. If you are also one of those who run regularly and have never suffered from shin splints or other related injuries, then this may not be for you. If however, you do experience any difficulties or injury problems that may be attributed to your running technique, then barefoot running may be the answer to all these issues.

The anti-barefoot running people also argue that running without shoes can lead to more injuries as you may puncture your feet after landing your stride on an inappropriate surface such as pointed stones, broken glasses, small sticks etc. To avoid such incidents, there are a number of barefoot-style running shoes available in the market which protect your feet without compromising the benefits of barefoot running.