Causes, Symptoms and Treatments of Acromegaly 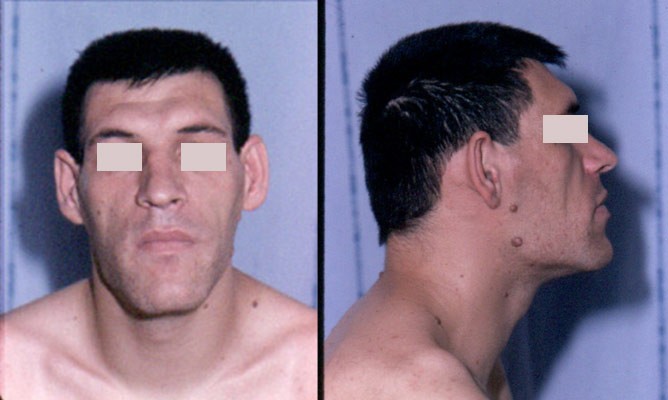 Acromegaly is an extremely rare condition which exists due to excess growth in the bones and the soft tissues of the body. When this problem exists in children, they tend to grow taller than others of their age. They may also end up with an exaggerated bone structure which will make them appear as giants. This problem mostly affects legs, arms and face.

What are the Causes of Acromegaly?

The basic cause of this problem is an increased presence of the human growth hormone. This is the reason why the people suffering with this problem tend to grow bigger bones as compared to other people of their age. This hormone is made in the pituitary gland and at times a tumour causes abnormal production of this hormone.

What are the Symptoms of Acromegaly?

There can be numerous symptoms for excessive growth of the body. First of all the bones in the face, feet and hands are going to be larger as compared to people of the same age. In the case of women, they tend to grow more hair on their body. The jaw and tongue is enlarged as well. Other problems may include headaches, inability to sleep, profuse sweating, body odour, oily skin and thickened skin, swollen and painful joints and lastly, hoarse voice.

How can Acromegaly be Diagnosed?

Several people suffering from this problem don’t even know about it. However, once the doctors get to know about it, they perform certain examinations in order to test their patients.

First of all the doctor is expected to perform certain blood tests. These tests are going to help out in examining the human growth hormone levels. The abnormal growth of the bones can be tested through X-rays and MRI scans.

The doctor is also expected to test for a protein called insulin-like growth factor known as IGF-1. Levels of IGF-1 can determine the abnormal growth in the body.

In total there are three treatments for this problem. It depends upon the age of the person suffering from this problem and then the doctor takes action accordingly.

Medicines are used in order to block the high level of HGH production. This method is mostly used for kids.

The surgeon might opt for removing the tumour which exists inside the pituitary gland of the brain.

In case the person is suffering with large tumours inside the pituitary glands, then the doctor may opt for the radiation method. In this case the surgeon uses radiation in order to destroy large tumours which might exist in the brain.