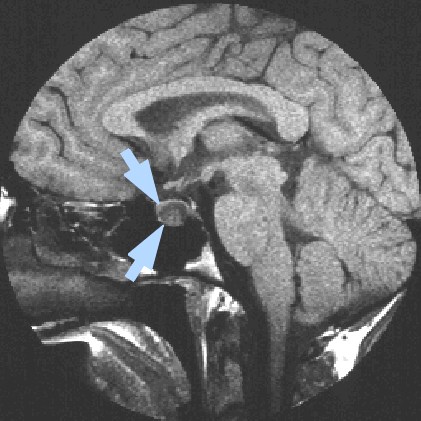 Pituitary gland is an important part of human body and it is located behind the eyes and right under the front of the brain. The size of this gland is as big as a pea.

Even though it is extremely small in size, manages to produce hormones which are extremely important for proper functioning of the body. It controls organs such as thyroid gland, adrenal gland, ovaries and testicles. Since it is controlling other glands as well, pituitary gland is known as the master gland.

Most tumours which occur in the pituitary gland are non-cancerous. Others are functioning which means that they keep producing hormones. Ones which do not produce hormones are called non-functioning tumours. Cancerous pituitary tumours are extremely rare.

What are the Symptoms for Pituitary Cancer?

There are certain symptoms which can be seen once the person has pituitary tumour. These symptoms include the likes of extra hormones in the blood, large hands and feet, weight gain, extensive hair growth, lack of milk while breastfeeding, irregular heartbeat, headache, vision lost, weak muscles and bones, menstrual cycle change, impotence, loss of hair, bruising easily, confusion, seizure and delayed sexual development and growth in children.

How can Pituitary Cancer be Diagnosed?

The doctor is expected to run certain tests including blood and urine tests. MRI or CT scan may be used to locate the tumours.

Just like other types of cancers, this cancer is also staged once the diagnoses take place. The stage is determined after it is seen that how much the cancer has spread out in the body. A treatment plan is formulated once the diagnosis takes place. Currently there are no guidelines for staging this type of cancer as it is extremely rare.

How can Pituitary Cancer be Treated?

The treatment for this type of cancer mostly relies on the spreading of the cancer. The doctor tries to determine whether the tumour is producing more hormones or it has spread out to other sites or not.

Once pituitary cancer is found in the human body, doctors mostly opt for a surgery. Generally the surgery is followed by a radiation therapy. In order to shrink or destroy the tumour, drug therapy can be used as well.

How to sleep super fast

Celebrity Secrets on How to Get Rid Of Cravings